What You Should Know About National Animal Groups - Help Pet Shelters

What You Should Know About National Animal Groups

About the Humane Society of the United States

CharityWatch, an independent evaluator, gives HSUS a “D” grade in its Summer 2020 rating guide. CharityWatch finds that HSUS spends up to 49 cents for every dollar it brings in–in other words, it is a “factory fundraising” operation.

Additionally, tax records reveal that the Humane Society of the United States has about $50 million offshore in the Cayman Islands and other areas. That’s money that could be helping animals. HSUS also settled a major racketeering/bribery lawsuit in 2014 for about $11 million. 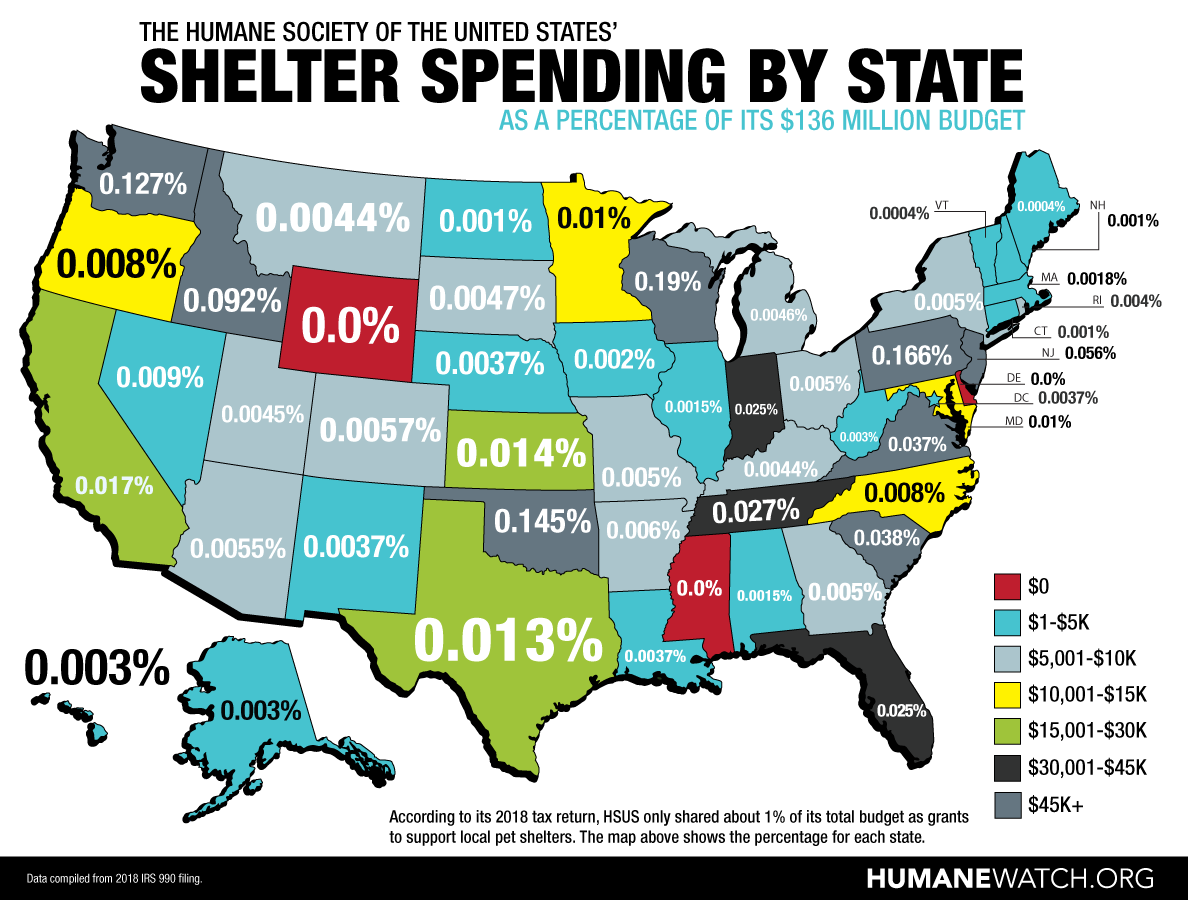 Lastly, HSUS had a major sexual harassment scandal in 2018 that its board attempted to sweep under the carpet. The Washington Post and the New York Times both exposed a culture of rampant sexual harassment at HSUS involving key leadership and CEO Wayne Pacelle. The investigation to date revealed at least three cases of harassment and disclosed that another three women were paid settlements (with donor money) when they suffered career consequences because they went to HSUS leadership with concerns.

According to its 2019 tax return, the ASPCA had over $21 million in offshore accounts. Additionally, the ASPCA CEO made over $800,000 that year and 159 other ASPCA employees (more than a tenth of the organization) made six-figure salaries. Of every dollar donated to ASPCA, 38 cents was used to pay salaries and benefits. The ASPCA also spent $94 million on fundraising-related expenses to churn out direct mail and other appeals.

CharityWatch gives the ASPCA a mediocre “C” grade in its 2020 Summer Rating Guide.

Like HSUS above, the ASPCA also settled racketeering/bribery lawsuit. The ASPCA paid $9.3 million to settle.

Many people have heard of People for the Ethical Treatment of Animals (PETA). Despite its name, however, PETA’s animal shelter–run out of its headquarters in Virginia–has an extremely high kill rate. According to official government records, PETA has killed about 40,000 animals since 1998. In 2018, PETA killed 1,711 cats and dogs–about 50 times more than it adopted out. PETA also advocates for the mass killing of feral cats. Learn more information and see the evidence at www.PETAKillsAnimals.com.

At the same time it is killing pets, PETA has an extreme political agenda. PETA does not believe Americans should be allowed to enjoy a milkshake or a hamburger; a trip to the zoo or aquarium; or even own a pet. PETA’s president has said, “Pet ownership is an absolutely abysmal situation brought about by human manipulation.”

PETA is an animal liberation group, which is different from a group focused on animal welfare (treating animals well). If you want to help pets find a forever home, don’t give to PETA.

What about us: Help Pet Shelters?

Want to help save pets?
Unlike those national groups that give as little as 1% of their donations to local pet shelters, our program gives 95%.
Donate Today